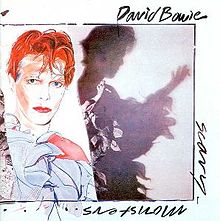 And now, we come to another of those albums that casts a long shadow over Bowie's career.  Arguably dwarfed only by "Ziggy Stardust", its inescapability is illustrated by the way that every half decent album he's produced since has had the 'best album since "Scary Monsters"' tag sprayed upon it at some stage, as every collection since has been cursed by association with what some would tell you is The Last Of Bowie.

Let's not get into that argument just yet, and focus on the music in front of us now, rather than down the road.  So: in this writer's excruciatingly humble opinion, the album draws a line under the Berlin experiments, serving as a final crystallisation of the qualities exhibited in each album - the brutality of "Low", the drama of "Heroes" and the playfulness of "Lodger" - and winding up as more than the sum of its parts.

It grabs your attention at the very outset, with Bowie screaming through "It's No Game (Part 1)" and Robert Fripp unleashing barrages of twisted noise - and not for the last time on the album, with the delightfully skewed "Fashion" being as much Fripp's as it is Bowie's.  "Ashes To Ashes" is a bona fide UK Number 1, back when that mattered, and helped to remind people about a certain spaceman, whilst being an absolutely spectacular entry in its own right.  The title track is gloriously intense.  Even the cover ("Kingdom Come") is pretty good, and as "Pin Ups" showed that's not always the case when our man's dealing with someone else's material.

There's talk that there is a thumbing of noses at early eighties artists who were influenced by Bowie but looking to surpass him - as any student of the squared circle will tell you, a good way to get yourself over is to defeat the last generation's champion - and whether that's the case or not, it's easy to look upon this as a game changer for British music, as the old trend-setter moved the goalposts again and left everyone scratching their heads.  In short, this one comes heavily recommended.

After the creative peaks of the past few albums, "Scary Monsters" was a comparative commercial success, bringing the artist closer to his seventies peak of recognisability and reactivating his profile in America without necessarily compromising in terms of the accessibility of the material presented.  In terms of success, though, what happened next would blow all of that out of the water...