Right.  Time to bite the bullet...

COVER: Doctor Manhattan in a syrup. 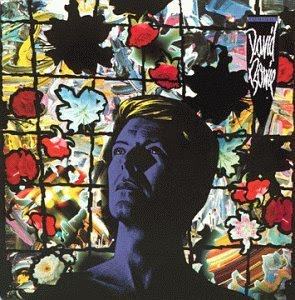 Whilst I seem to be one of the few defenders of "Let's Dance" amongst my peers, it would be so much easier if I didn't like it.  My admiration for that album makes my contempt for this one seem like a jarring fall from a reasonably great height; at least if I'd given up after "Scary Monsters", this would feel more like the result of an incremental drop in quality, or simply an established artist edging away from the genre I preferred them in.

But no - as my colleagues are fond of saying, "we are where we are", and where I am is slap bang at the start, which to my mind is actually the total lowest point, of the worst period in Bowie's musical development.  I think it; you, most probably, think it; even he seems to agree, which at least means I don't have to worry too much about expressing my disappointment.  So roll up your sleeves - we're going in.

Let's start, controversially, on a positive note; "Blue Jean" is an excellent pop song, and the accompanying short film "Jazzin' For Blue Jean" is a hoot, albeit for pretty much all the wrong reasons.  Similarly, opening track "Loving The Alien" is hooky enough to defy its seven minute running time, despite incorporating the theme from "Red Dwarf" as a pre-chorus section (yes, I know that came out afterwards; no, I will not stop cracking that joke, damn it).

And that's it.  Two lone diamonds in the roughest of the rough, two twinkling points of light in the middle of the dense fog.  Almost the entire rest of the album consists of painfully bad renditions of songs either newly or latterly co-written (and in some cases sung) with Iggy Pop, who is, of course, great - as you'll know, since you've read about him in our Extra Credit entries.

Somehow, at no stage does this ever, ever work.  The paranoid brilliance of "Don't Look Down" is performed as a lazy reggae snoozefest.  "Tonight" is presented here also in chilled-out form, shorn of its dramatic introduction and any emphasis and inflicted with a Tina Turner vocal.  "Neighbourhood Threat" is...  Just awful.  Just so, so awful.

Then we have yet more covers, with terrible and pointless versions of "God Only Knows" and "I Keep Forgettin'" helping to ram home the unpleasant comparisons to "Pin-Ups", which before this was probably the only album he'd produced that could be described as uninteresting.  The final slap in the face is "Dancing With The Big Boys", which at the very least is just a big old mess rather than the almost malicious tracks that have preceded it.  And there we have it: you've just survived what I have no hesitation in naming The Worst David Bowie Album.  Give yourself a pat on the back and have a lie down.

This was the commercial experiment rumbling on - an attempt to maintain the much larger, and likely more casual, audience built up with "Let's Dance" and the Serious Moonlight tour.  Annoyingly, it's not like he wasn't capable of a good tune around the time either, as highlighted by an expanded reissue from the Nineties which contained "Absolute Beginners" and "This Is Not America".  Blame the circumstances of recording, blame the decade, blame the slapdash song choices - whatever it comes down to, this was a big, big miss.

Perhaps tellingly, it would be three years before another Bowie album came out, and that in itself would be an attempt to get back to basics and repair some of the damage done here.  But the Eighties were a harsh mistress, and 'basic' was never on the cards for established recording artists...

Join us next time as we develop a social conscience, invent a new species and meet a dancer named Spazz Attack.  Surely you can't miss that!
Posted by G.F. Hirons at 1:43 pm