COVER SHOT: Now THAT is a jacket. 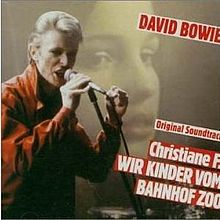 I'm not going to be covering all of the soundtracks, compilations and associated projects, but I've always found this particular one an interesting artefact, tying together as it does the Berlin period whilst soundtracking a German film.  Of course, as we've recently heard (or you should have done - even if I take time off from writing, as an audience you are still expected to check back twice daily), "Scary Monsters" did that quite well itself, but there's a few white elephants here worth listening to.

First things first - the film, which somewhat embarrassingly I must admit I haven't got around to watching, is an adaptation of the titular book taken from the recollections of the eponymous person, whose youthful drug abuse and revelations of the squalor of the Berlin heroin scene scandalized a continent in the very late seventies.  The film appears to be a teensy bit on the depressing side, but also features a trip to a Bowie concert - hence the connection, and hence the collection.

And what a collection it is!!!  It's not exactly a greatest hits, but the quality is undeniable, culled not just from the big rock/pop hits but also the instrumentals, evidently more suited to background status in a moving picture.  Whilst there isn't technically a single track on this offering that isn't available elsewhere, there are some less usual versions on show here, including an edit of "Stay" that might as well be subtitled "(Disappointment Mix)", such a let-down is the early fade.

One alternative version that squarely hits the mark is "Heroes/Helden", and if YOU guessed it lapses into German halfway through, well congratulations, Sir!  (Or - infinitely less likely, but just in case - Madam.)  The effect is pretty spectacular, with the natural brutality of the Teutonic tongue adding to the drama.