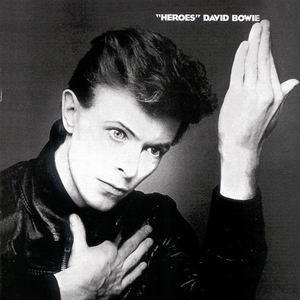 Now here's something you don't hear everyday; a David Bowie seemingly completely at ease with the creative process.  More playful than "Low", more focused than "Lodger", with arguably the highest yield of chart-ready material and the genesis of a sound that will come to commercial fruition in a couple of albums' time, it even shows an evolution of the "side two is instrumentals" schtick from the previous album.  Bowie continuing something?  It seems wonders will never cease.

Let's get the title track out of the way.  One of pop's iconic moments, near-universally adored, free to cross the usual battle lines of genre demarcations, infinitely adoptable as an anthem for athletes, rescuers, pioneers and courageous souls of all shapes and sizes, it still sounds in some way different to almost anything else.  It also somehow survived an utterly pedestrian Oasis cover, which is usually enough to sink the most steadfast of tunes.

But what else lies inside, eh?  More of the same, and yet...  Not.  For we've finally broken out the positive vibes: for instance, "V-2 Schneider" and "Sense Of Doubt" are the pick of the instrumentals, which seem less chilly and more celebratory than those on "Low".  In fact the whole album seems as if a weight has been lifted from the protagonist's shoulders; as if the downward mood slide commenced on "Aladdin Sane" has finally, finally resolved itself into a grand ascent.

Witness the artist at play on the whimsical closer "The Secret Life Of Arabia", which is almost high camp in comparison to the offerings from the preceding few albums, the majestic "Sons Of The Silent Age", later immortalised on the Glass Spider Tour as the one where Peter Frampton sang the chorus while Bowie did some pretentious physical business with a lady on skis, or the just plain bonkers "Joe The Lion", which is just plain bonkers.  All great works, only slightly undermined by their proximity to the title track, which cast such a shadow it threatens to consume the overall impact of the album.

Moreover, this is an album which points towards the future more than most; we have shades of "Lodger" and "Scary Monsters" (er...  Spoilers, I guess?), and a basic sound that permeates some of his work right up to the present day.  Plus we'll be seeing that cover again, or most of it, anyway.  But we're not quite ready to leave Germany yet, so order some...  I dunno, sausages?  And one of those beers in a funny cup, and the trousers.  You know: German stuff.

Join us next time when we'll Keep Swinging Red Sails Back In Anger, D.J.!
Posted by G.F. Hirons at 8:19 pm