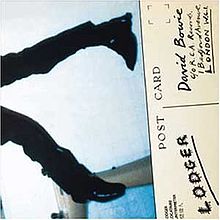 For the final instalment of the Berlin trilogy, we come up against a slightly rum egg.  The three albums have driven the usual Bowie changes along at a wicked lick.  Whilst the glacial "Low" traced a lineage from previous offering "Station To Station", the project has sped away from that spirit of introspection and borderline self-flagellation, with "Heroes" acting as the riveting pivot to whirl us into... This.

Sounding reasonably carefree, even - dare I say it - camp in places, this is an album that showcases experimentation and play, but possibly topples onto the wrong side of the fence of pretention.  The fence itself has a soul patch and is reading Camus, whilst stroking its chin (what?  Fences have chins) as it notices the slightly dishevelled, Bowie-like figure that has toppled over it, and exhales a lungful of ghastly Camel smoke, shrugs and says: "c'est la vie".

Everything has a lightness to it that has been absent for a few albums, like the gradual slackening of the creative strings over the trilogy has relaxed the players to the point where loose-limbed affairs like "Fantastic Voyage" can saunter along at their own merry pace, where a repurposed "Sister Midnight" has never sounded so relaxed (or, indeed, relaxed at all), where "Boys Keep Swinging" sees the musicians swap instruments, though given that they're highly sought after session musicians who were practically raised in studios, this may not be the huge ask some make it out to be.

"DJ" is about as paranoid as it gets, and that's not coming near the heights of angst scaled even a year  previously.  Just to put the tin hat on it, even "Look Back In Anger", a song that is ultimately about death, is played for lyrical laughs, as a bored reaper thumbs through his target's belongings whilst waiting for the gnashing and wailing to subside.  This happy ending to a tumultuous late seventies sees us wave goodbye to Eno, who's off to inflict U2 on us - but he'll be back with a vengeance.  There will be entrails and eyeliner and many recriminations, but before we get to that it's time for another decade entirely.

Kajagoogoo!  The Sinclair C5!  Fatcher (the "TH" having been forever removed by establishment wet fart Ben Elton)!  These and many more things will be utterly ignored next time out, as A Godawful Small Affair gets its red braces out, watches a documentary about our impending utter thermonuclear destruction and cracks open a Citrus Spring and some Sizzlin' Bacon Monster Munch (this one's for you, Mr Worthington) as we hit....  THE EIGHTIES.

Join us next time for some clowning around.
Posted by G.F. Hirons at 10:53 am