COVER SHOT: I can't actually think of anything hallway funny or snide to say about this one, so...  Yeah.  Moving on. 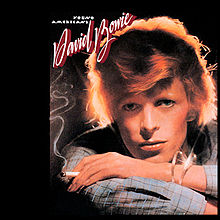 Without much fuss, we skip over "David Live" - actually never heard that one, but by most accounts that's not a huge tragedy - and crashland into a real curate's egg.  In 1975 Bowie regurgitated the soul music he was heavily steeping himself in onto an album.  Some call it plastic soul, some say he's plundering black music, and some just think it's a bit of a mess, but there's the shapes of things to come (mercifully not "Shapes Of Things", though) in this surprising deviation.

Which leads to the question: given that we've just had "Aladdin Sane", "Pin Ups" and "Diamond Dogs" in a row, can a change of musical style actually be considered a deviation, given that deviation itself has almost become a running theme?  This is the era that wasn't - if one considers the run from "Hunky Dory" to "Aladdin Sane" as the Ziggy portion of his career, the Berlin trilogy, and the easily-capsuled Eighties, early Nineties and run from "Hours" to "Reality" as convenient career parcels (with Tin Machine handily segregating itself), what does one call this bit?  The American albums?  The age of experimentation?  The mental illness epoch?  Answers on a postcard...

Now, we're not big on posting videos in this particular strand of the blog, but I think it would help to illustrate where Bowie was "at" at the time to show you this:


Look at the suit.  Look at the hair.  Look at him weighing two stone.  THAT'S the man that made this record.  It also needs to be noted that this album was recorded during a break in a tour.  So here's an artist most likely averaging over an album a year at this point in his career, taking time off from a coast-to-coast tour of the US and recording another album.  That really puts the workrate of modern musicians in an unflattering light.

As you may have guessed by my obfuscation up until now, I've not got too much to say about this one.  It always kind of washes by without leaving much of an impression, aside from the title track and closer "Fame", which features a visiting Johan Lean-On from the Silver Beetles, Liverpool's fourth favourite band after Pink Floyd, Deacon Blue and the Australian Pink Floyd.

Elsewhere it's all slick - Earl Slick, that is, providing some lix 'n' riffz - and competent, and I seem to remember liking "Fascination" and "Win", but I couldn't whistle 'em for you.  I also remember thinking there were bits that almost foreshadowed his eighties output, particularly a bass breakdown, but again, where was it?  I couldn't tell you.  Again, not a bad thing as such, and as a tribute to a form of music Bowie was particularly feeling at the time, it's better than "Pin Ups".  Perhaps, again like that album, this suffers from its positioning - right after "Diamond Dogs", and right before things get really out of hand...

Join us next time as we go looking for God in all the wrong places.
Posted by G.F. Hirons at 1:35 pm