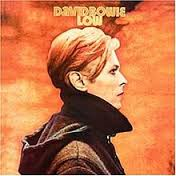 In the more recent history of retro, if such a time-bending concept can be credited with existence in the first place, there seems to have been a shift of sorts in what bit of Bowie's output the majority thinks is the coolest.  No longer is the Ziggy Era the one-stop shop for hip happenings; a number of listeners now opt for the appropriately-monikered Berlin Era.

This may in part be for the romantic images it conjures up, with Bowie and Iggy Pop decamping to Berlin to frolic in the shadow of the then-actually-a-wall Berlin Wall, before David Hasselhoff had to come and bring peace to a desegregated Germany, sadly not in a talking Trans-Am.  Nights on the town, days in the studio - a fruitful and artistic time in a cultural scene unlike any other before or since.

But let's not let all that guff spoil our appreciation of a real turning point in the man's career - though admittedly, it's not like turning points are hard to come by in that collection - where a full embracing of electronic noisemakers and the influence of one Brian Eno, (relatively) fresh out of Roxy Music but not quite at the point of artistic suicide with U2, produced a glacially cold but utterly compelling album of two halves, and one that can almost be considered the first David Bowie album unfettered by a dominating character; perhaps this was another hat he was donning, but those of these songs that are favoured with lyrics include some of the most starkly personal confessions to date.

As I have been alluding to, there's a proportion of instrumentals on this album that seems unsettlingly high.  In fact, now I think about it, I'm not sure Bowie had released any instrumentals before this.  (That seems like the kind of thing I could easily research...  Nah, it's late.  I'll plough on.  They'll never notice.)  So of eleven tracks, we get the five brutally short, be-lyriced pop songs the dominate side one and six electronic instrumentals that comprise the whole of side two and more.

And it's all great.  Highlights from the traditional platters include "Sound And Vision", which despite my words in my earlier "Station To Station" piece may actually be the real end of the Plastic Soul experiment, sounding as it does like "Golden Years" shot into space and deprived of human contact for a great many years, "Always Crashing In The Same Car", a smoothly futuristic celebration of a failed vehicular suicide attempt, and "Be My Wife", a simple but extremely effective declaration of love and need with a very underrated closing guitar solo.

The instrumental offerings have been described as dour, but "A New Career In A New Town" and "Speed Of Life" are actually really jaunty 'n' joyous numbers, and "Art Decade" is the sound of the future we expected to come.  It's difficult to envisage in a world where all genres of music can be instantly accessed and experienced, but this album played a significant part in bringing synthesizer music to the masses, like The Beatles in their psych phase or Nirvana's resurrection of the bands they grew up on, so whilst side two can be a challenging experience it's one that's well worth it from a cultural point of view if nothing else.

Looks like we'll be sticking around in Berlin for a wee bit then - and there's plenty to see and hear, so why don't we extend our stay a little?