COVER SHOT: "Would you like to see some puppies?" 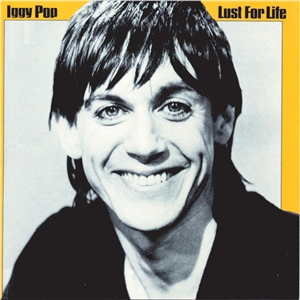 Here's one you'll probably know; Iggy plants the seeds for his eventual canonisation in the nineties.  The film of Irvine Welsh's Scotch language junkie ode "Trainspotting" would eventually propel the title track of this album into the stratosphere, happily coinciding with Britpop to bring him kicking and screaming up to date.  Plus, it's got "The Passenger" on it.  But what else is there?

The first thing to mention is that this is much more of a conventional rock album than "The Idiot".  There's nothing as alien as "Mass Production" or "Dum Dum Boys", nothing so sonically unsettling, but the lyrics bring all the unease one might expect, forming a loose arc or at least a series of peaks of troughs, going from celebratory to despairing to threatening at a rate of knots.  Also of note is our first visit from the rhythm section that is the Sales brothers, Hunt and Tony.  I wonder if we'll be hearing from them again on our journey, hmmmmmm?  Hmmmmmmmmmmmmmmmmm?  Hm.

Speaking of things we may be hearing from later, the album pivots on central track "Tonight", which starts with Iggy howling at the bedside of a dying acquaintance ("SHE WAS TURNING BLUE!!!"), before resolving itself into a delightfully cheesy little number which marks the album's sleeper highlight and sparks off its strongest sequence of songs.  And speaking of cheese, next up:

Next up, the genuinely distressing "Turn Blue" (is anything not turning blue on this disk?) finds Iggy in "Word On A Wing"-mode, confessing his largely drug-related woes; it seems all the success, praying and pleading GTOs, Government loans and whatnot just doesn't fit in with his character, as he becomes the boogeyman again, stalking the squares of respectable suburbia as the "Neighbourhood Threat".  The story has come full circle: the half-feral real wild child - wait, I'm getting ahead of myself - from The Stooges has broken back through, to flail around stages for decades to come.  Long may he continue to do so.

Well, we've had some fun diversifying from our main topic, and now it's time to turn back to our original focus.  But remember what we've heard here; some of these songs will be returning in different forms later on.  Some will be welcome...  Others, really not.

Join us next time for a return to our usual schedule.
Posted by G.F. Hirons at 9:27 am