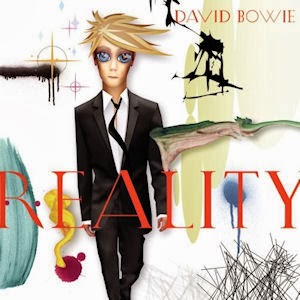 Having been slightly unprepared for my own strength of ill feeling, or least lack of feeling, towards "Heathen", I approached "Reality" with substantial trepidation.  Let's get this bit out of the way now: it is better than "Heathen".  It's nowhere near the top of the tree, but it's perfectly serviceable and with a fair few good tracks.
There's one other thing that it most definitely is: cool.  Not, however, the sort of effortless cool you might associate with The Fonz, or "Where It's At" by Beck, or a SUDA 51 game; no, this is the kind of cool that's worked hard at, like a teenage wardrobe, Matt Smith as Doctor Who or a post-Strokes indie band.  It's full of itself and screams it from the rooftops - and that's not always bad, but it does make the album come off a wee bit smug at times.
Witness the cover of Jonathan Richman's "Pablo Picasso".  Whilst not as wholly uninspiring as the last album's Pixies cover, it's like a collision of good bits of music and ideas, but too many of them at once, with Bowie throwing the lyrics on top wherever they fit.  Or "Fall Dog Bombs The Moon", which is so laid back it keeps stopping.  Or "New Killer Star", which has a good verse and a good chorus - apparently from different songs.
Then there's the closing track, "Bring Me The Disco King".  It's said that this was an idea that he'd had knocking around for quite some time, trying to figure out what to do with it.  The answer seems to have been to make a very loose-limbed, lounging crawl across the finish line.  It's not bad at all, but you get the feeling it thinks it's better than you - or maybe that's me being paranoid again.
Also, "Try Some, Buy Some" can fuck off.
But hey!  "The Loneliest Guy" is a cracking ballad, with good use of empty spaces, and "Fall Dog Bombs The Moon" actually is a very good offering, despite teetering under the weight of its own cool.  Even "Reality" itself is a bombastic track to send the album into the home straight, like a latter-day "Suffragette City".
Moreover, this album leaves an impression, unlike its predecessor.  And this is important, because for a long time we thought this might be the last of Bowie; after a cardiac incident, and that horrible episode with the lollipop in the eye, he withdrew from the recording industry for an indefinite period that started to seem more permanent as time went on.  This may have been the last thing he left for us: an album that tries hard and largely succeeds, full of what in retrospect seemed like coded references to retirement and death.
Join us next time for...
Posted by G.F. Hirons at 7:00 am