One From The Vaults: Mark And Lard/"Fuzzy Logic"

From 1993 to 1997, Mark and Lard were contemporary tastemakers to the young and the restless, a pair of hip older brothers with an extensive and varied record collection and an initially impenetrable sense of humour.  DJs Mark Radcliffe and Marc "Lard" Riley, the latter of whom was a former victim of Mark E. Smith (all Marks today, eh?), built a safe space for the musically curious with their casual delivery and championing of the unlikely.

Aside from playing the latest indie hits - and what a fertile period it was for that, let's face it - they would also spin some older selections, helping me to draw a line through music and connect the influences to my latest favourites and slowly warming me to the idea that newer wasn't necessarily better.

There were also the live sessions, which I and many others would capture on a spare TDK D90 for posterity: Marion and Mansun spring to mind, as getting their sessions on tape tripled the amount of music I had to listen to by them, but there was also Nick Cave breaking the epic slaughter of "O'Malley's Bar" into three parts, either The Tindersticks or Babybird appearing what seemed like every single night and of course the mighty Salad, whose performance of "Kiss My Love" was nearly derailed by some impromptu animal noises by an errant backing vocalist.

(Whilst I remembered these, I also did a bit of research at http://www.scrawnandlard.co.uk/sesions.htm, which is well worth a look - and if anyone's got a recording of that excellent looking "Now I Got Worry" era Jon Spencer Blues Explosion session, please do get in touch!)

There were contests both real and ridiculous, an intriguingly pretentious section with a featured musician reading poetry or prose (and usually plugging a latest release at the same time), the rising of cinematic curmudgeon and unconvincing greaser Mark Kermode, parody songs by the bucketload, "Fanfare" by Eric Matthews and the show where they had an extra pip for the re-calibration of Greenwich Mean Time, but Lard lost it, which on paper doesn't make any bloody sense at all now I think about it but it's staying in nonetheless.

Success actually did come a-knockin', and the writing was slowly appearing on the wall for the late night wonderland as the unlikely pair gradually, and presumably at least partially accidently, grabbed a heaping handful of the zeitgeist, and as such were sucked in to the Radio 1 Breakfast Show upon Chris Evans' final throwing of toys from pram in 1997.

This was not a fantastic move - in part as their humour had to be toned down for a pre-watershed audience, in further part due to the musical restrictions placed upon them, and in yet another part due to Evans' gleeful scuttling of the ship - but it did lead them to a more comfortable early afternoon slot, where they gave this now-employed member of society a whole bunch more chuckles at lunchtime, and found time to play the odd graveyard smash, before their tearful break-up in 2004. 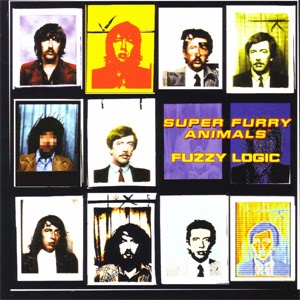 FOUND: I can't pretend to have been on board since their first release - the "Llanfairpwllgwyngyllgogerychwyrndrobwllllantysiliogogogoch (In Space)" EP - but Mark and Lard brought the lead single from this album, "Hometown Unicorn", to my attention.  An extremely short snippet of the video was also shown on The Big Breakfast; Jesus, remember that show?  The hell was that all about?

The album was purchased instead of dinner from Bedford's Our Price, during the wait between Media Studies and Computer Studies lessons and soon after the death of my cat Fizzy, after a typographical mix-up in the NME caused me to think there was a track on the album called "Fizzy Birds".  Well, "I" is next to "U" on the keyboard, so I suppose it's forgivable.

THE SELL: "Britpop" was a bit of a misnomer, referring as it usually did to English bands making their traditional regional music, usually split into Northern and Southern camps.  Very few interlopers were allowed at the party; arguably, more Swedish bands got swept up in the palaver than did the other British countries.

Super Furry Animals were one of two medium-profile Welsh bands (the other being Gorky's Zygotic Mynci) who were co-opted into the empty party, despite making psychedelic-flavoured music with lyrics written in Welsh, rather than the English used the country's last alternative export, the Manic Street Preachers.  For this, their first album on the uber-cool Creation Records, they did deign to sing in English, inarguably bringing them more crossover appeal.

THREE KINGS: Otherworldly and with a hint of sinister overtones, first single "Hometown Unicorn" sounded like nothing else that was being done at the time.  Three more singles were released from the album, most of which were great, but I remember the noisy mayhem of "Frisbee" and the extended chug of "Hangin' With Howard Marks" more fondly.

WORST TRACK: I was never keen on "Something For The Weekend", though apparently I am simply wrong about that, as a rerecorded version was issued as a single and promptly broke the band into the top twenty for the first time.

ALSO TRY: Follow-up album "Radiator" lacked pace, though that wasn't necessarily a bad thing (though "Demons" went on for about ten hours), which leads me to prefer third album "Guerilla", which expands the instrumentation and use of electronics to produce a hugely inventive album.  However, SFA achieved perfection with the "Ice Hockey Hair" EP; there is no greater crystallisation of their range of styles than said four-track artefact.  Go and get it.  Now.

BUT AVOID: Every album since their return to the Welsh language on "Mwng" has left me cold, with "Rings Around The World" being the last I bought.  It would be improper of me not to add that the odd good single has still been produced since, so I am always open-minded with regards to their new material.

MAGIC MOMENT: Not so much a moment, but this was THE album to have amongst my peer group towards the end of 1996, and 'twas I who cottoned to it first.  On such things the world once revolved.
Posted by G.F. Hirons at 2:00 pm