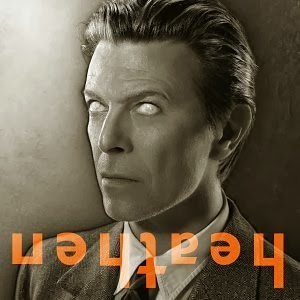 "Nothing remains..."
Well, we're off to an optimistic start here, aren't we?  A logical progression from "Hours...", towards the more mid-paced reflective, and - dare we utter that worst of musical profanities - adult-oriented material, and one track into the album we're straight into Maudlinville, with nowt but a one way ticket.
Contrary to the popular D:Ream song of the late nineties, I fear things cannot only get better.  DB's covers output has been patchy, as evidenced by "Pin Ups" and "Tonight".  Here he tackles "Cactus" by the Pixies, with little added but some funny noises and an extended midsection; it's still infinitely better than the following "Slip Away", which is a painful crawl through what appears to be an attempt at a heartfelt... Something.  I'm not entirely sure what, but something.
So we're a quarter of the way through the album and nothing has really switched me on yet; even by this point on "Tonight" we'd already had "Loving The Alien".  So the question must be asked: is this as bad?  The answer - of course - is no.  It's largely original material, rather than the jaded, mid-tour covers on the earlier selection, and it's inoffensive to the ears.
But let's consider that for a minute: here is an utterly inoffensive David Bowie album.  I've tried to think of the albums I've reviewed negatively in this series, or less gushingly at the very least, and I don't think I've ever been at such a loss for words before.
"Tonight" certainly makes its presence felt, even if it is an unwanted one; "Black Tie White Noise" won't bloody shut up with that saxophone; "Pin Ups" is stuffed with classic songs, if not classic versions thereof; and "Space Oddity" and "Young Americans" have some great tracks and are fantastic genre pieces, just in genres I'm less familiar or comfortable with.  Plus there's the Tin Machine stuff, which I still managed to get a few gags out of.  All of these have talking points...  "Heathen", for this writer at least, simply doesn't.
What's good here?  Well, "Slow Burn" has an appropriate title, but at least it does burn, showing that this style of music needn't be boring.  "Everyone Says 'Hi'" is a nice little song, loaded with a wistful message that any ex-patriot of country or town would want to hear, though it does get a bit tiresome when he starts listing absolutely everyone who says 'hi' - "and your cousin Fred/and his daughter June/and Queeg from Red Dwarf/and Blue Monster (Munches)/and former Gretna striker and medical doctor, Kenny Deuchar/and Larry 'The Ax' Hennig" and so forth (which is totally unnecessary since he has already stated, quite unequivocally, that everyone says 'hi', and since that includes, well, everyone, there's really no need to go any further into it - not to mention that it's grammatically troubling to hear that you can add people to 'everyone', since 'everyone' AND "the guy upstairs" is more people than 'everyone', which is an impossibility on the level of schoolyard favourite 'infinity plus one'...  Sorry, where was I?)
To sum up: this is album that will quite happily go by in the background, and that's not what I personally look for in a Bowie album.
Join us next time for something that I will hopefully be able to actually write something about.
Posted by G.F. Hirons at 10:54 pm