COVER: "Will it stop, Doctor?  The drumming?  Will it stop?"  (David Tennant cries unconvincingly for three hours; fin) 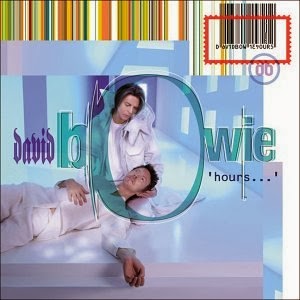 Having suffered the slings and arrows of a dullard music press for daring to reach with his last two albums, Bowie closed out the Nineties not with part 72 of the hyperdiary of Nathan Adler as was planned earlier in the decade, but rather a solid if unspectacular album, albeit one with some dizzying highs, and a definitive step away from the more overtly electronic and dance music elements of the previous two albums.

But what a jaw-dropping start: "Thursday's Child" may be mature and tame compared to the material that directly preceded it, but good lord it's a good song - one for which the descriptor "emotive" can be deployed without sarcasm.  "Something In The Air" keeps the human drama at a high level, chronicling the (inevitable?) end of a relationship with tragic agony.  Many things the Nineties Bowie may have been, but this is the first time he'd really been sad - and it works.

After that stunning double-header, we're unfortunately introduced to some very pedestrian territory, with "Survive" being a common-or-garden lost love tale, even going so far as to put the line "I miss you" in there.  It could be viewed as stark, raw, shot through with naked simplicity; to this writer, it just seems a bit empty, and the following seven minutes of "If I'm Dreaming All My Life" not quite knowing where to go don't exactly help matters.

"Seven" perks things up next; it seems like a second attempt at the kind of simple confessional that "Survive" was aiming for, and it's a lot more successful at it.  From there the album settles into a pattern of dull song, good song - note the terminology there as well, for these are not bad songs per se, merely somewhat lacking in vigour and interest.

Nowhere is this more apparent in the couple of songs that immediately follow: "What's Really Happening?" is another meanderer, but "The Pretty Things Are Going To Hell" tears your face off.  In fact, "...Pretty Things" is just downright fantastic, and with a title like that it was always going to provoke interest.

Easily read as another Bowie bye-bye to his sordid past, its instrumentation wouldn't be out of place on an Iggy Pop solo offering, and I waste no time in proclaiming the track the lynchpin of this album - with the unfortunate caveat that it has now peaked, and the rest is rendered somewhat obsolete.

So, what do we have here?  I'd say another transitional album, another "Black Tie White Noise" (though better than that), another "Diamond Dogs" (though not as good as that); an album with some brilliant, brilliant individual tracks and a consistent sound, but one that's never going to be the first of his albums you pick from the pile, and sadly a death knell for the more vital-sounding Bowie of the last couple of albums.  Still: worth a listen.