One From The Vaults: Our Price/"Odelay"

Had I been moved to examine music in the mid-nineties a couple of years earlier, I might have remarked that there were only a few larger record shop brands left.  The rate of decay in the high street is now so large that attrition has taken care of every single instantly recognisable brand in that bracket but for HMV, and who knows how long that will limp on?

This startling demise has been blamed, variously, on the rush to embrace the sale of electronic doo-dads, the supply chain problems caused by Woolworths' collapse, the rise of online retailers (arrogantly dismissed by former HMV chiefs, with disastrous results) and supermarkets increasingly offering the goods at prices so low that the high street can't afford to undercut it.  The upshot of this is that I'm sure most musically-minded people of my age who lived in a small town has tales of a chain sorely missed.

I don't think my town of Bedford was alone in having a branch of Our Price as its major music-specific outlet.  The retail chain with the iconic red logo started up in the seventies but really took hold in the eighties, with spin-offs including specific stores for VHS sales, eventually numbering hundreds of locations and sometimes several in the same area.

When I reached my teenaged years, there was a certain stigma about buying records at Woolworths or WH Smiths, as if you were somehow circumventing the music industry - I suppose that's a bit like buying a CD at Tesco these days - so Our Price was the place for more widely-available CDs, favourable over the less predictable stocking and incorrect alphabetising of Andy's Records.  This was an argument that paid no mind to WH Smith actually owning the Our Price brand, but hey - we were young, and it was the nineties.

The Bedford store was a triumph of function over space, as the thin store was crammed with stock.  Not so the Milton Keynes branch - that was a two-floor monster, seeming to showcase every major-label release and a good deal of smaller ones.  Jobs, when they came up, were the holy grail for to a certain section of young adults, with empty pockets largely from the purchase of records, who recognised the chance to kill two birds with one stone.  I was unable to get a job there, as it's not like they were short of choice.

The rot set in in the late nineties, not just for the chain at large but for the Bedford branch in particular.  On the same street, a newly-opened MVC with a comparatively huge size was battling for sales, whilst WH Smith sold the stores and the Virgin Megastore chain to the Virgin group in 1998, who set about a vicious rebranding.  Hence one day we had a "VShop" instead, which eventually turned into a mobile phone shop.  With Andy's in similarly bad shape, and collectors' favourite Sounds Good To Me Too also gone, young pretender MVC was the last high street record store standing - and even that focused almost entirely on DVDs.

Our Price were by no means the last chain to get the plug pulled on them, but are probably the one I miss the most.  For records you could get outside of specialist shops, Our Price was my default destination, unless a trip to London and their sprawling HMV and Tower Records stores was in my near future.  The high street has seemed somehow less colourful without it - though Vodafone's colours are exactly the same, so...  Erm... (Quick, cut to the review!) 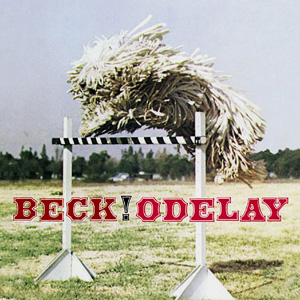 FOUND: Through super-cool single "Where It's At" on MTV Europe and the radio.  Purchased in a controversial "cash-for-voucher" deal involving Wolf People frontman Jack Sharp, whereby an unwanted Our Price voucher was purchased from said gent and used to procure the album.  I was buying it anyway so everyone was happy.

THE SELL: Beck was catapulted to fame with the track "Loser", which struck a sympathetic chord with the fashionably-jaded MTV Generation, though to be honest I'm still not too keen on the track myself.  Signed to Geffen, who had a proven track record of giving more alternative artists the freedom to express themselves and a half-decent wage, he was given an excellent platform to present himself.

This album helped cast off his mantle of one-hit wonder, spawning about twenty singles and establishing him as a household name (in relative terms, anyway).  He was also tokenised as one of the few American acts who were 'allowed' to be saluted during the Britpop era, as an example of a US act offering something a bit different from the post-grunge malaise.

THREE KINGS: Without wishing to be predictable, super-cool single "Where It's At" and the dynamic and unusual "The New Pollution" have to be in the top three.  The album is eclectic enough that most people would probably be able to choose different favourites, but I'd have to plump for the schizophrenic barn-burner "Novocaine" myself.

WORST TRACK: The comparatively uninteresting "Sissyneck" was a properly odd choice for a single, even it was about the eighth released from the album.  However, this writer doesn't listen to "Ramshackle" much, as it was the first song he heard after getting the news that his grandfather was dead.

ALSO TRY: The next album proper ("Mutations" doesn't count, as it is rubbish) "Midnite Vultures" is a cod soul experiment that largely hits the mark, and later on "Guero" is almost the spiritual successor to "Odelay", mixing excellent pop tunes with more eclectic fare.

BUT AVOID: I hear "Mutations" is rubbish!  Perhaps a little harsh, as it has a few decent tunes, but the while thing is so mumbly and plucky that it's hard to make it out through the fog.  The albums before "Odelay" are also hit and miss, to put it very kindly, and "Sea Change" is immensely depressing.

MAGIC MOMENT: At Glastonbury 1997, in unbelievably boggy conditions, Beck encores with "High 5", clad in a white rhinestone suit.  Unlike every other band that weekend, he does not get mud thrown at him.
Posted by G.F. Hirons at 2:06 pm