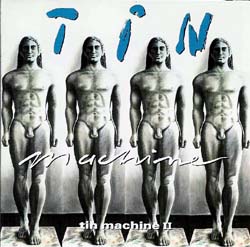 (If you're seeing another man's junk on this cover for the first time, then let me give you a hearty "YEEEEE-HA!"  Hello, America!)
I don't own "Tin Machine II", but decided to borrow a copy from a friend for several reasons.  Number one, I wanted an excuse to meet him for several drinks, which inevitably ended with me stumbling home early in the morning, waving a sandwich of dubious origins (not a euphemism, I must add) at my recently-sleeping wife.  Also, I did those Iggy Pop albums on a much more tenuous link than this, given it's a Bowie-fronted project, so in the end I felt I had made my own bed on this one.
If you've more than a passing interest in our protagonist, you hear a lot about how bad this particular offering is, and this was my first ever listen to the article.  As such perhaps I was feeling less condemnatory than others who had lived with it for longer, but this actually starts out alright.  There's even some very pleasing squalls of guitar terror from Reeves Gabrels, which point the way towards some of the things we'll be discussing from the mid-nineties.
In fact it was all going uncannily well, when an unfamiliar sound shocked me out of my reverie: an alien voice, not like Bowie's at all.  A chameleon he may be, but this was something quite different; and then I remembered the words of my friend, as he furtively passed me the disk in the manner that one may attempt to downplay the exchange of pre-internet pornography, or Arctic Monkeys albums:
"You do know the drummer sings on this?"
Oh, he does alright.  He really, really does.  He sings in a big, huge, scenery-chewing, Joe-Cocker-asking-for-A-Little-Help-From-His-Friends style - and it's awful.  I cannot stress enough how pedestrian it renders everything.  And that's when you remember: I wouldn't be listening to this if Bowie wasn't involved.  And the illusion is shattered, never to return.
It doesn't help that the song immediately after Mr Sales' unforgettable vocal debut is "Shopping For Girls", a track purportedly about child prostitution, which is a very serious subject and all of course.  However the lyrics' tales of mattresses in rat-infested hovels and drug dependency only served to remind me of what I hated on the first album: post-Live Aid, U2-evoking, we-gotta-sort-this-out arena rock.
So goodnight, Tin Machine.  There will be no encore.  I'm not doing "Oy Vey Baby", I get away with that one on a technicality since I didn't do "David Live" or "Stage".  Next time, it's back to the solo career, and back to the fun, as Nile Rodgers comes back on board and we get "Let's Dance 2: Electric Boogaloo"!
Except, as per usual, it didn't quite work out like that.
Join us next time for "Real Cool World"!  Yeah, that's not happening either.  Instead, get ready for one wedding and two funerals.
Posted by G.F. Hirons at 12:55 pm