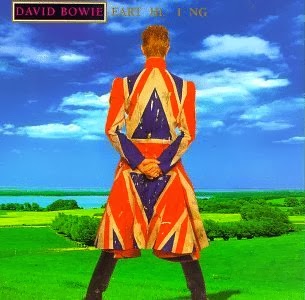 Now, if "Outside" was chuckled at, but largely tolerated as a passion project for a beloved cultural icon (despite, as we previously covered, being awesome), "Earthling" was the one people really tore into.  Lambasted as the work of a "rave granddad", it was accused of everything from lamely rehashing the dance music of the time, specifically jungle and drum and bass, to borderline racism in its adoption of predominately black music styles and Bowie's use of the union flag on the cover.

However - and you can probably guess where this is going, given my oft-contrary nature - it's actually really good, and here's why.

Much like the previous outing, this is Bowie taking up the influences of the contemporary music scene and regurgitating his version of it.  Now, it's not like me suddenly deciding to go crunk, but only having access to my bass; Bowie can afford the best musicians, producers, instruments and gadgets in the world, so him having a try at it is not likely to be bad, merely initially disquieting that you are hearing a voice you know over music you don't associate with it.

Some seemingly can't get over that - the rest of us will be over here, giving it a fair listen.

Granted, there are some ridiculous bits here, like the early nineties BBC children's show noises that introduce "Dead Man Walking", and the much-slated chanted intro to "Looking For Satellites", which ages itself by namechecking Shampoo and Boyzone...  Mind you, if he means Shampoo the product rather than Shampoo the two piece girl band, then it's technically timeless.  Ah.  Well done, that man.  In all though the lyrics are, well, a bit random, given that they have largely been chewed up and spat out by the Verbasizer, a program designed to do exactly that.

Come into this with an open mind, and there's much to enjoy: the sheer joy of "Little Wonder", the slow-burning and eventually explosive "Seven Years In Tibet", the paranoid bleeping of "I'm Afraid Of Americans" and perhaps best of all, the enthrallingly noisy "Battle For Britain (The Letter)", which remained a staple of live sets right up to the last tour.

I've often been dismissed for my rabid defending of "Outside" and "Earthling", but remember: this is MY Bowie, the one I heard as a teenager; the one I danced to at the Limehaus, the one I saw in the union flag coat at Phoenix and resplendent with perm at Glastonbury.

It's no different to my mother hearing "Rebel Rebel", or an eighties teen buying "Let's Dance", before driving home in his Sinclair C5 for a can of Quattro and a bag of Tubes.  They may have cultural resonance for me, but I challenge you to listen to these albums without expectation, and see if you enjoy the experience.