A Godawful Small Affair: Nineteen "Outside" 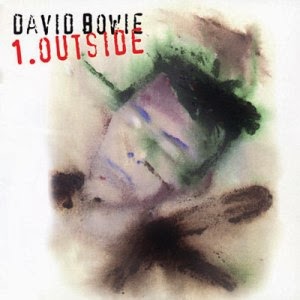 Doctor Who.  Formula 1.  David Bowie.  All long-running obsessions for me, and all marked by eras with a single figurehead - actor, champion, persona.  Different people fill these roles at different times.  Broadly speaking, the one that leaves the biggest scar on an impressionable mind will forever be enshrined in it as The Real Deal.

Before the release of "Outside", I had no real conception of David Bowie, no fixed idea of who he might be.  My parents had some of his records and tapes, which I listened to quite often, and occasionally old footage would be on the television, but it was all once removed; lacking in the cultural proximity required to resonate more totally.

In 1995, there was finally a definitive collision between Bowie and myself.  "Outside" was nothing if not well promoted, with all the major music magazines, talk shows and even the burgeoning Internet carrying interviews and live performances - not to mention the recently-installed cable box bringing the dear departed MTV Europe to our living room.  That channel was playing the holy bejesus out of the first single from the album, "The Heart's Filthy Lesson".

Ah, that single - it got them talking.  Whilst several pop gems can be found amongst the spoken word pieces and the creeping dread, this was not one of them, with Mike Garson doing his skeleton dance across the piano, Reeves Gabrels shattering the solid backbeat with salvoes of jagged noise, and David pleading with his invented antagonist - "Oh, Ramona...  If there were only some kind of future..."

What's happened, then?  How did we get here from "Buddha Of Suburbia"?  Two words: Brian Eno.  With the madman and his deck of Oblique Strategy cards behind the desk, and a group of virtuoso outsider musicians for them to corral, Bowie was back to his frustrating, unpigeonholeable best.  Together they served up "Outside": a 75-minute album with a storyline that spanned several decades, about a ritualistic murder and the odd characters that had been caught in its web.

Most controversially, the album had a mid-nineties sound, showing the influence of modern dance music, industrial noise and cut-up sound collages on Bowie.  Others have said this shows a sad continuation of his fall into imitation from innovation, but I see this as a logical extension of his ever-present instinct to co-opt the forms of the time and regurgitate them, shot through with this own slant.

This album couldn't be made in any year other than 1995.  Pre-millennial excitement was really kicking in, but with it came the desire to pack up the 20th century, to sort it neatly, put it away and label the box for future generations; a seeming need amongst contemporary humanity to sum up 100 years of conflict, progress, love, loss, evolution and revolution in 20 words or less.  From Blur to Prince to McAlmont and Butler (sort of), everyone had jumped on the once in a lifetime millennium music bandwagon.

"Outside" was meant to be the start of a several-album project - three, maybe five, depending on who's counting - documenting the end of the century.  Having allegedly recorded 24 hours of material for this first instalment, it seems that Bowie was crushed by the weight of his own idea, and nothing else emerged.  So we may never know who killed Baby Grace, and whether or not it was art - but this album certainly IS art, and is ignored at one's peril.

The aforementioned pop gems are in there, albeit in slightly skewed form.  "Strangers When We Meet" is presented in completed form, feeling like the full painting to the roughly sketched version on "Buddha Of Suburbia", and "I Have Not Been To Oxford Town" and "Thru These Architect's Eyes" are excellent packages with substantial potential for wider appeal.  "No Control" is right on the button of the times, "Outside" almost a musical counterpoint to "Heroes" - but this is only half of the story.

For once you're hooked, the macabre ringmasters will snap you right back to something like "Wishful Beginnings", which sounds like fetid decay, the horrible beginnings of ill feelings in the back of your mind; or "The Motel" finds our narrator reporting from a slow purgatory, slowly building to the proclamation that "there is no hell like an old hell"; or the utterly inhuman "I Am With Name".

Witness also the astounding relentless pounding of "Hallo Spaceboy", later remixed for a spirited attack on the charts by the Pet Shop Boys.  Having heard a rumour from Ground Control, he turned this into the third Major Tom song, but I wonder if he's not the extra-terrestrial we're waving goodbye to here - perhaps Bowie was packing his 20th century away too, and the Ziggy Stardust character with it, trying to claim a last chance to escape from its long shadow.

Look: I've gone on too long here.  Every other entry in this series is about seven paragraphs, and this one's already eleven; that should tell you something.  Let it be this - you have got to hear this album.  If just one of you goes and listens to this and finds something of worth, all of this pointless bloody writing, which distracts me from useful things I could be doing and brings me nothing but self-imposed disgust at my inability to keep a decent schedule, will be worth it.

But please: do it right.  Do it 1995-style.  Read the damn short story.  Get your headphones on.  Immerse yourself.  Give it a chance.  And if you like it, tell your friends.  Tell them this album is Garreth Hirons' David Bowie at work, and it is awesome.

And that - all of that I've just battered out on my terrible keyboard, all of the above - is why "A Godawful Small Affair" was nearly called "The Heart's Filthy Lessons", why I wound up buying and listening to every other Bowie album, why I'm still coming up with new takes on the murder mystery - The Minotaur did it, but who was The Minotaur?  ALL OF THEM! - and why other Bowie fans regard me as some sad mutant who's clearly got it all wrong because I prefer this album to "Hunky Dory".

In conclusion: Peter Davison is The Doctor.  Nelson Piquet Snr is the greatest Formula One world champion.  And David Bowie is a middle-aged industrial musician in bad eyeliner, who sings near-future detective stories.  These things are clear to me, and I would not ask for them to change.

Join us next time as we neck some Mick Mills and get down in a field in the middle of the night - or not, for legal reasons - it's "rave granddad" time!
Posted by G.F. Hirons at 3:32 pm