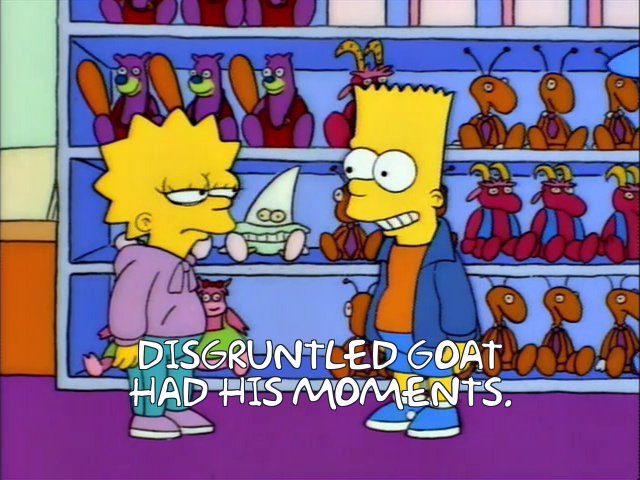 Bart and Lisa become aware of a magical place where their violent desires come to life: Itchy and Scratchy Land!  This leads to an unrelenting campaign of botherment on a scale not seen since they wanted to go to Mt Splashmore.  Marge and Homer eventually relent, won over by Parents’ Island, although Marge is sore at having to cancel their vacation to a bird sanctuary, and pessimistic as to their chances of an incident-free break, mindful that their previous holidays as a family have been absolute disasters.

And disastrous it appears to be, as Homer converts the family’s money to worthless “Itchy and Scratchy Land Fun Bucks”, Bort license plates are running desperately low and both Bart and Homer are arrested by park security for attacking actors.   But in the meantime, despite reassurances that nothing could possibli go wrong, the robots that provide the park’s entertainment have rebelled, which is also Homer’s fault for befuddling them with flash photography.

What follows is a carnival of peril, destruction and petty vandalism, as the family band together to repel the robo-threat with disposable cameras.  The experience brings them closer together, leading them to declare the vacation their greatest family holiday ever!  But with peace restored, and the five of them rewarded with two tickets for a return visit, thoughts turn to the fate of Euro Itchy and Scratchy Land…

The riffing on Bort licence plates, using a clever inversion of audience expectations (yes, I *did* do GCSE Media Studies, thank you very much for noticing) to create a running gag out of the childhood disappointment that any person with an unusually-spelled moniker could expect at a display of personalised doo-dads.

A peek at the ancillary characters from the short-lived “Itchy and Scratchy and Friends Hour” featuring Uncle Ant, Ku Klux Klam and Disgruntled Goat, who – lest we forget – had his moments.

The few seconds we spend in Euro Itchy and Scratchy Land, a reference to the then-failing (but now more stable) Disneyland Paris: 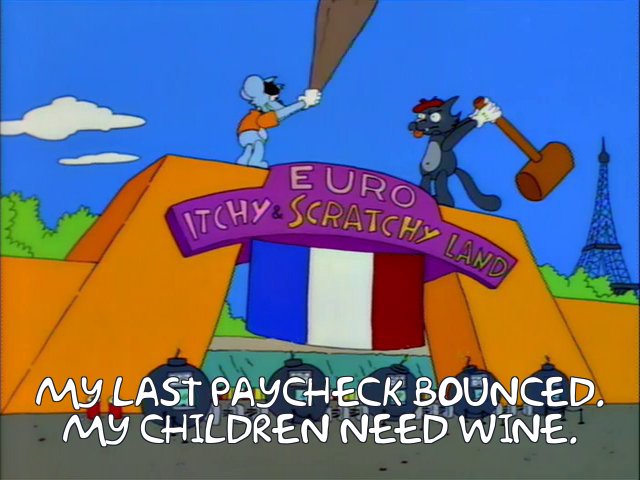 I did worry that we'd have to go for "Auld Lang Syne", but luckily there's an allusion to "Fantasia", which brings us...


Brrr.  Sorry - ever since that twisted, Poison Mickey Mouse started street entertaining in the town centre, I can't look at the original without feeling like my soul has been scratched with an icicle.

The Simpsons love a theme park - to name but a few, we had the aforementioned water park Mt Splashmore in "Brush With Greatness", Legoland's legally-distinct cousin Blockoland in "Hungry, Hungry Homer", and Maude Flanders' legacy Praiseland in, erm, "I'm Goin' To Praiseland".  Hm, makes sense.  On top of all that, Itchy and Scratchy Land itself actually appears in a later episode where Carl and Lenny give Homer bad news in a fun place - I think it's "Mommie Beerest", which as later episodes go isn't too bad.

As an aside, so far-ranging was the cultural influence of the "Bort" sequence that items personalised to Bort, such as the license plate pictured in the episode, are  available in both Simpsons-themed venues and unaffiliated ones.  But did YOU know that bort is a term used in the diamond industry to refer to shards of non-gem-quality diamonds?

The More You Know, huh?  Or at least, The More You Copy Verbatim From Wikipedia Without More Varied Research That Might Come Back To Haunt You Later...

Another insane episode, this time very much a tribute to "Westworld" (the original film, not the series.  Obviously, since the series only just came out.  Why did you think it was the series?  What kind of an idiot are you, huh?  HUH???  That's right, run away!  Run back to mummy, you little idiot!  IDIOT!!!)

Oh yes, I remember *clears throat*: but much like "Homer The Vigilante", it's grounded by its series of relatable experiences - the sensory overload of a theme park visit, the complex moving parts of a family vacation resulting in near-inevitable disappointment for some or all parties, the inability to find your perfectly reasonable name in a collection of personalised items - all damn near universal experiences for a child or family in the West.

The careering off the rails into a robot massacre is therefore earned, given the time that has been spent hooking the audience in, and the sheer amount of quotable lines - "we've also arrested your older, balder, fatter son", "please kill me", "my son is also called Bort", to name but a few - really push this one through the roof and into the upper tiers.

Join us next time when we’ll be discussing attractive cousins.
Posted by G.F. Hirons at 6:00 am