22 Short Pieces About Springfield: Number Fifteen - “Can you swing a sack of doorknobs?” 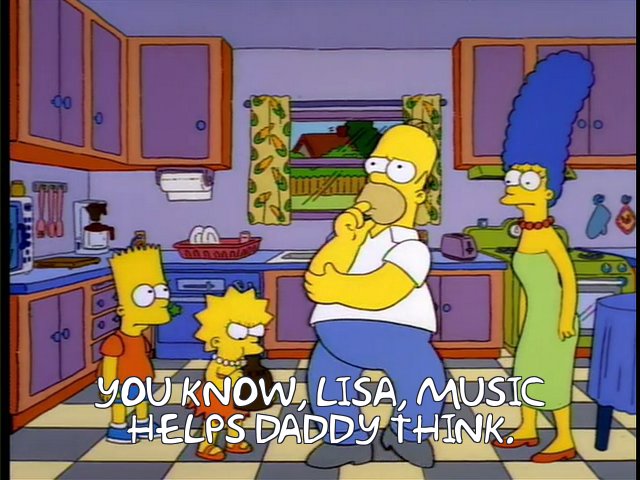 Springfield is in the grip of a one-man crimewave, as the Springfield Cat Burglar’s reign of terror leaves its residents fear-stricken and without valuables, such as Lisa’s treasured saxophone.  With the police “powerless” - read: incompetent - a Neighbourhood Watch group is formed, immediately gets drunk on power (and beer) and begins its own reign of terror.

The Cat Burglar contacts Channel 6’s Smartline current affairs show, whilst Homer is appearing as a guest, to announce that he will be attempting to steal the world’s largest cubic zirconia from Springfield Museum.  Whilst guarding the museum Homer is goaded into a drinking competition with some teen ne’er-do-wells and the zirconia is snatched.

Grampa saves the day by noting that a fellow resident of Springfield Retirement Castle, a charming senior named Molloy, has been seen walking much more vertically than usual and wearing sneakers – for sneaking!  Indeed, he is the Cat Burglar; and having returned the town’s possessions, he sends them on a wild goose chase reminiscent of “It’s A Mad, Mad, Mad, Mad World”, whilst he makes good his escape.

Homer giving the gang codenames: "I'll be Cue-Ball, Skinner can be Eight-Ball, Barney will be Twelve-Ball, and Moe, you can be Cue-Ball".

Springfield’s choice of home defence systems, including Professor Frink’s automated house that gets up and runs away.  And falls over.  And catches fire.  Nice try, though!

..Or in this case, not much singing or dancing.  So here's the theme from "Dragnet", which occurs during a scene where Homer and Skinner nod at each other.  It's the Art of Noise version from the eighties film because the others are, like, five seconds long.

As alluded to above, Molloy seems never to have appeared again – although he was guest voiced (by Sam Neill), which explains that adequately but also rather puts the kibosh on me talking about him.  So, here comes (option) two!… Abraham “Grampa” Simpson first appeared in the Tracy UIlman short “Grampa And The Kids”, and is the show’s main elderly character.

Originally used wherever a senior citizen was needed for a joke, he’s largely been bumped from that role by Jasper and Old Jewish Man as time has gone on, becoming a main character in great episodes like “Raging Abe Simpson and His Grumbling Grandson in 'The Curse of the Flying Hellfish'" and “Grampa vs. Sexual Inadequacy”, and not so great ones, like that one where he was a fucking matador for some reason.

With his rambling stories, like the one about the time he caught the ferry over to Shelbyville.  He needed a new heel for his shoe, so, he decided to go to Morganville, which is what they called Shelbyville in those days...  I'm certainly not doing the whole bit but you get the idea - a great supporting character with his own memorable bit, albeit yet another suffering diminishing returns as time goes on.

This is a roller-coster ride of an episode, with plenty of crazy happenings that is still remarkably grounded by the raw feelings of loss, paranoia and anger being channelled by Springfield's residents, especially Lisa, whose saxophone becomes a symbol of the ill will caused by theft and home invasion, over and above the cubic zirconia.

Homer's band of hotshots, and their immediate descent into the worst excesses of the power that authority and violence brings, is made palatable by the episode's dishing out of their comeuppance and showing them to be as dim as they are ornery, with the burglar easily tricking them (and the rest of the town) into his trap.

And when that roller-coaster finally hangs for a second and plummets into the pitch-perfect reference in the show's closing moments, there's nothing to do but settle in for the ride, before reflecting on this perfectly paced gem of a half hour.  They don't come much better...  But apparently, fourteen did!

Join us next time for the blog where nothing can possibli go wrong.  I mean, *possibly* go wrong.  That's the first time anything's gone wrong…
Posted by G.F. Hirons at 6:00 am