COVER SHOT: Retro, almost before there was such a thing. 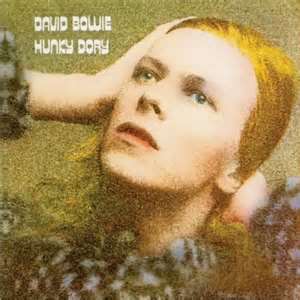 Now THIS is a good one...  Well, mostly.  "Song For Bob Dylan" and "Fill Your Heart" may be a bit unmemorable, and "Kooks" (the four oath-filled paragraphs that originally followed the word "Kooks"﻿ have been excised to comply with the Obscene Publications Act), but the rest of the album represents a spreading of wings, particularly with the first four tracks.
Bosh.  "Changes".  Bang.  "Oh! You Pretty Things".  Blam.  "Eight Line Poem".  Kablooie.  "Life On Mars?"  There's not many better fatal foursomes than that to kick off an album (and if you can think of one, well why not leave a comment).  From the ultimate statement of intent we get a casual announcement that the future is here, then wash through an arrestingly sparse ode to the lavish kitchen sink drama that gave this series its name - it's a rollicking ride, all the way to the ringing phone in the fade out of track four.
Consider that ringing an alarm, though; because then, bloody "Kooks" comes along and (again, we here at Atomic Sourpuss have taken the decision not to publish this section of text after several of our sub-editors suffered complete mental breakdowns whilst attempting to make it suitable for the general public).  Luckily "Quicksand" rapidly saves the day, with its whiff of demonica and excellent crescendo, raising the album back up to its former lofty glories.
What I assume would form side two of the album, had I ever bought a version with sides, isn't too inspriring at first, with "Fill Your Heart" being inoffensive filler, "Andy Warhol" overdoing the 'quirky studio fun' conceit before developing into a perfectly serviceable tune, and "Song For Bob Dylan" outstaying its welcome by at least one chorus.
Then we get "Queen Bitch", one of Bowie's most iconic tracks and a deft nick from the Velvets, the legend of which has endured largely due to the Whistle Test performance of the track apparently being the Beeb's only clip from that era, until they found that "Jean Genie" with the fisheye lens thing that they've broadcast approximately 136 times since last Tuesday.  And remember "All The Madmen"?  Here's its spiritual sequel, "The Bewlay Brothers", and that'll cap the album off nicely, thank you very much.
So the highs were high and outnumbered the lows, though the lows (we're not sure if he started talking about "Kooks" again at this stage; we didn't dare look but it seemed to be going that way).  If one can take a little bit of rough with their smooth, this one comes highly recommended.
Join us next time for...  Er, what's next again?  Must be something terribly obscure!
Posted by G.F. Hirons at 8:39 pm