THE COVER: I wish I could present this without further comment, but for the sake of continuity it's worth noting that the vinyl version is actually black on black.  It's so black, it's like, "how much more black could this be?"  The answer is none.  None more black. 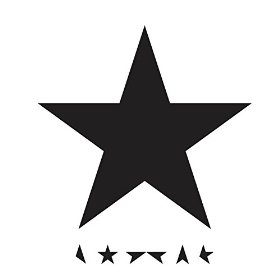 ﻿
A confession﻿: I did not expect to be writing this.  I assumed "The Next Day" was a retirement album, one last jolly before liberating obscurity.  Then unexpectedly - and perhaps now in context, suspiciously - a new, extremely confusing ten minute single was released.
We now know that the new, less conventionally-structured songs on this album owe much to Bowie's decision to work with musicians who were more familiar with jazz than pop, meaning that the natural constraints of rock music are lifted, and the listener is offered a more challenging yet equally rewarding experience.
I didn't listen to "Blackstar" the song more than once before the album came out, figuring I didn't have to; buying the album was my default position, what I had heard was at least enough to convince me it was more interesting than, say, "Tonight", so there really wasn't much point.

What I can say about it is that I thought it was essentially throwaway pretension on the first listen and got that quite wrong; it's a grower that has at least three genuinely great moments in, moments earned by the journey that gets you there and that justify the sheer length of the piece, which remains an anomaly in rock or pop music.  I also find it helps to think of it as three separate movements; indeed its closest touchpoint in the oeuvre is probably "Sweet Thing"/"Candidate"/"Sweet Thing (Reprise)" from "Diamond Dogs".
So track one's in the bag.  What else have we got?  Well, "'Tis a Pity She Was A Whore" is my particular favourite - but then it would be; whilst much of the album takes obvious cues from Bowie's unfairly maligned nineties output (the unrestrained saxophony of "Black Tie White Noise", the pummelling intensity of "1. Outside", the joyous, scrambling beats of "Earthling"), this is a track you could easily drop onto any of those albums.
"Lazarus", now lent new context (we're getting to that), "Dollar Days" and closer "I Can't Give Everything Away" are the more classically Bowie tracks, in so far as he has a classic sound; they ring with the confidence of "Heathen" and "Reality", but shorn of the more traditional cladding of those albums they fly with the abandon of the new, sounding as vital as any of his material has.

The one slight here - the "TVC15" of the album, if you will - is "Girl Loves Me", which is partially sung in a combination of invented languages.  It has been criticised in some areas of the press for containing swearing, about which I really couldn't care less; I just think it's a slightly less interesting and more repetitive trudge through the musical themes of the album.  Much like "TVC15" though, I bet Bowie was well pleased with it.

All in all the album was far more exciting and forward-looking than you would expect of any 69-year old's artistic output, and left us all wondering was next, and what, if anything, was there left to achieve?  That's the funny thing about life, though: as long as you're still alive, there's always one thing left to do.


And so this time we really do come to a rather final halt; no new albums will there be, no rumoured demoes will I countenance, no further entries for Extra Credit, no peachy prayers, no return for the Thin White Duke.

Which means I should probably try and have a stab at putting my personal admiration for David Bowie into a few inadequate words.  Where do I start with this one?

Firstly I would say that I haven't ever seen so many people that I care about be so perturbed by the passing of a stranger.  I think the reaction to Michael Jackson's death was probably fired by more people, as he was the larger international star, but in terms of people that I specifically share relationships with this was a real hammerblow.

Obviously people react to this in different ways; I and my contemporaries Tim and Ben are blogging.  Another friend put on a tribute night that amped up the attendees to the point the police were called.  Many have taken to social media to express a dislike of cancer.  Whilst I may feel the latter sentiment can go assumed and unexpressed, it's a valid way of assimilating the news, and yet more proof of its wide reach.

Secondly I would say that part of the reason his death has such resonance, and particularly in close proximity to releasing an album this eclectic and future focused, is that there is a genuine fear that there won't ever be another artist like David Bowie; someone who is left largely to his own devices by the recording industry to the extent that he is able to repeatedly inspire consecutive generations of people by adjusting his focus, rather than being encouraged to stick to a familiar formula that can be marketed in a set way.

Frankly, I personally think that this is the case, due to the changes in the industry since the sixties; the immediate post-Beatles landscape legitimised experimental and chameleonic acts, but the return of the rock dinosaurs post-Live Aid, the culture of big band reformation and how it has almost split the industry into two parts, not to mention the Internet, which has freed artists to be heard but also freed them from any hope of making any bloody money out of it, limits the possibility of this happening again.

But then again, I'm getting old.  I wouldn't know the new Bowie if I saw it, as I'd be too busy deriding it for not being the old one.

Finally, it's made me realise how inextricably Bowie's music has been woven into my life, and how many of my significant memories are tied in to it, including of course seeing him in person at Phoenix 1996 (full-on Outside era noise with some classics thrown in for good effect) and Glastonbury 2000 (all-out greatest hits, with a particular focus on "Station To Station" for no apparent reason).

Then there's the first dance at my wedding ("Let's Dance", obviously); the time I performed "Starman" in Karaoke Bar Champion on the outskirts of Golden Gai in Shinjuku, Tokyo; the many Bowie covers of popular beat combo The Eighteenth/Desperate Living, including but not limited to "Jump They Say" and "Heroes"; singing harmonies on "Space Oddity" with my mother shortly before leaving home; or any of a hundred heated debates at Orme Watch HQ.

Essentially in closing, I apologise for my hypocrisy.  For years I have said that we shouldn't be sad when an ageing celebrity who's had what appears to be an excellent life dies.  However: now I am sad.  But good lord, what a legacy to celebrate, and I'm glad I got a chance to do it in some small way.

Beautifully put...can you dig it?

Genuinely sad there'll be no more Godawful Small Affair. Though The Glam Metal Detectives are calling...